So I’m going to preface this by stating I know there is a giant market for custom boutique pedals. Some are well worth the price tag but others are just copies of copies. I also know it’s somewhat of a collectors market too. I am that way but certain things but stomp boxes are not one of them. I can 100% justify using them in the studio but I typically go for functionality and reliability for live shows. That’s why I used Boss pedals for so many years. I was always on the road from 2003 to 2011. And then again from 2013 to 2018. You just can’t break those damn pedals. You can stomp the hell out of them, spill things on them and they just keep going. Not to mention getting thrown around in the band trailer. However a ton has changed in terms of gear in the past decade (especially).

Let’s start by talking about my setup. As I said I’m tried and true to certain gear. I have used my Marshall JCM 900 (100watt) + 4×12 (with celestions) for just about everything since 2002. I play a mix of ESP Eclipse and Gibson Les Paul’s, all hot rodded with EMG 81/85 humbuckers. My Fender Jaguar has a Dimarzio Super Distortion in the bridge, My Mustang a Seymour Duncan JB and my Jagstang has a Dimarzio Tone Zone.

Everything is patched together with Audio Blast cables. I highly recommend them. They are very flexible and bendable. Solid metal construction on the ends. They are also very thin on the ends for hard to reach areas. They also come in multiple sizes with a five year warranty

NYC Cases set me this board years ago. I dig it because 3 of the pedals are on a riser and you can hide your power supply under there

TC Electronic PolyTune
Honestly this was given to me. It’s simple, straightforward and very accurate.

Digitech Whammy – 5th Gen
I have been using the whammy since the late 90s. I was persuaded to buy the XP 100 Whammy-Wha because of Tom from RATM and the boys in KoRn. I never had much luck with those. I went through three of them in a few years. The digital components always seemed to crap out. The functionality was annoying too. So I was really happy when they re-issued these copies of the original. You can get really weird with this pedal and the functionality it’s pretty straightforward.

MXR “Wlyde” Overdrive
I typically roll my eyes and they make custom “musician branded” pedals. I’m also not a big overdrive guy. My tube distortion is lovely. I used to use an EQ pedal to dull my amp distortion as an overdrive. However the reason I wanted this was because many overdrives are not enough and they are really high pitched. Since this one is catered more towards metal players it has a lot more low end. You can get a typical blues sounding overdrive out of it but I crank it to 11. Sometimes I even stomp it on (on top of) my tube distortion and just get really noisy and annoying

Electro-Harmonix Small Clone Chorus
This is a mid 90s model so it sounds amazing but it’s not built that well. I had to open it up and re-solder a bunch of wires. However it does give you that beautiful analog Nirvana Nevermind tone.

Electro-Harmonix Polychorus
I have one one of these since I was a kid. However I couldn’t afford it back then and I can’t justify the price tag on the original models now. On top of that they take up so much space on your board. You can get some wild sounds out of this. I found Kurt Cobain‘s handwritten settings for his use of this pedal on the In Utero record. This re-issue is spot on. It sounds just like that record. You can get some really noisy gritty tones and you can also get some pretty chorus and flange

Boss PH-3 Phase Shifter
A lot of phasers in the flangers sound the same. This one has some cool features that warp the sound. It may be too digital sounding for some people but I really like it. The Rise, Fall and Step modes are what I always use. Super cool sounding I guess that’s where the “shifter” part comes in to play. It also does your stereotypical phase settings. I’ve had this since high school. If it ain’t broke, dont fix it.

Joyo Atmosphere Reverb
My buddy turned me on to this company. From what I understand they are a newer Japanese company. They make really cool wall pedals at a very affordable price. I bought this solely because of the shimmer effect. It sounds like a damn Steven Spielberg score. It’s a really big sounding reverb. Very comparable two in MXR product. The rewind and trail options are also cool to play with.

Boss DD-5 Digital Delay
This is another one that falls in my tried and true category. I’ve had this for damn near 20 years. When they first came out it blew my mind. The Hold feature where you could sample your stuff blew my mind. You can also get a really long delay out of them. My other guitarist and I would set them to where we had dueling delays on stage. The reverse mode is super fun too

Donner Noise Killer – Noise Gate
This thing is so tiny and completely blew me away. I ditched my Boss NS2 Noise Suppressor immediately after I got this. You would need 2 of them (fully maxed out) to come anywhere close to this pedal. Whatever is going on in that tiny enclosure is amazing. The dial is super sensitive. You can get almost mathematical style cuts for metal music or dial it back a bit for a healthy amount of feedback. It also kills any unwanted amp hum and buzzing from your pedal chain. 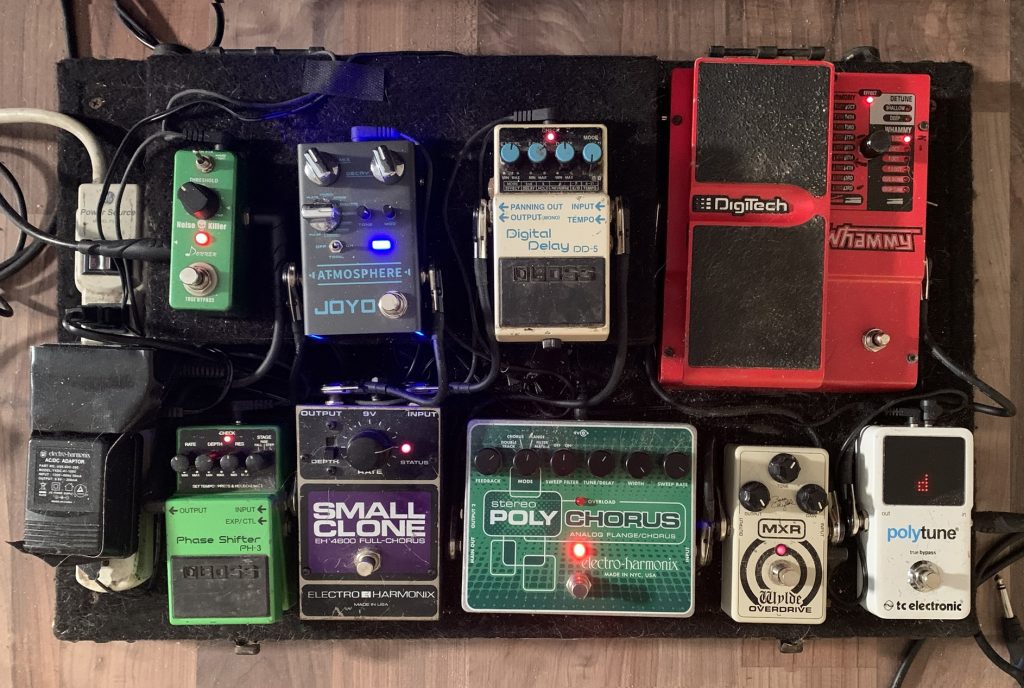