So you might have seen Kurt Cobain’s infamous “Sky-Stang” from the 1993-1994 In Utero tours. Most noticeable on the MTV “Live and Loud” performance. There were 3 of them in total. The first had a white Seymour Duncan JB humbucker, the other two were black. All three had a sonic blue finish with a red-tortoise pickguard. He also had a Fiesta Red model named “Orang-Stang”

Being the nerd I am, I really wanted one of these. Back in 2012 Fender issued the Kurt Cobain Mustang with the Duncan mods. I was gifted a Lake Placid blue model with a racing stripe. It’s amazing! However I really wanted this model as well. Good luck! These are selling for $2500-$3000 online and they go quick. Sorry, I am not paying that much for a guitar that sounds identical to one I own.
With that being said I decided to build my own. I found a decent 2007 Fender Mustang MG65 (made in Japan) on Facebook Marketplace, snagged the pickguard off WDmusic.com and grabbed a humbucker off reverb. The guitar was white, so my buddy Rob Broyhill painted it sonic blue. Rob is a master at guitar painting, check him out!

Let’s call this the “Sky-Stang JD model” since there are some differences here. Kurt’s was an MG69 model. The back on those are contoured and the neck is smaller. But Hey, a 2007 MG65 for $600 on Marketplace seemed fair to me. I play hard rock & metal so I prefer the Dimarzo Super Distortion (DP100)  humbucker (which his Jaguar signature is loaded with) over the Duncan JB. My dude Jason Racino is a wizard with guitars. He wired the Dimarzio and set up the guitar. The bridge is not fixed but it’s pretty locked down. This is set up for CGCFAD drop tuning with 52-10 gauge strings. Lastly I added Sperzel Trim-Lok 6-In-Line Tuners. The Fender stock tuners are horrible. I did this on my Jag-stang as well. My KC Jaguar came with Gotoh Tuners.

All in… This build was 1/2 the price of the 2012 Fender models. Who knows if Fender will re-issue them one day? I still have my 1996 Jag-Stang and Fender just did a cash-grab by reissuing them for $1300 (without a Duncan JB). 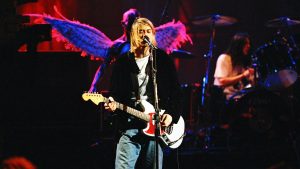 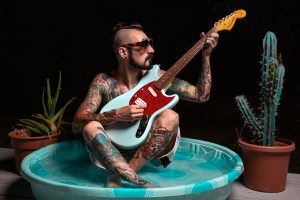 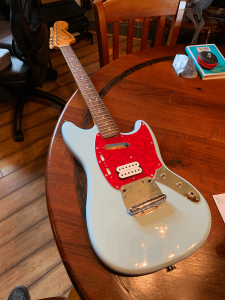 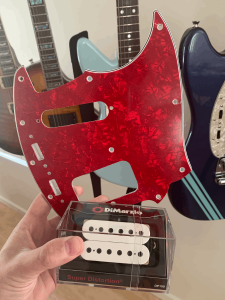 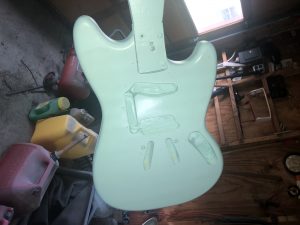 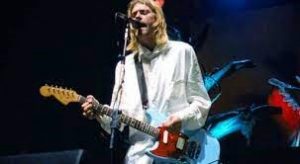